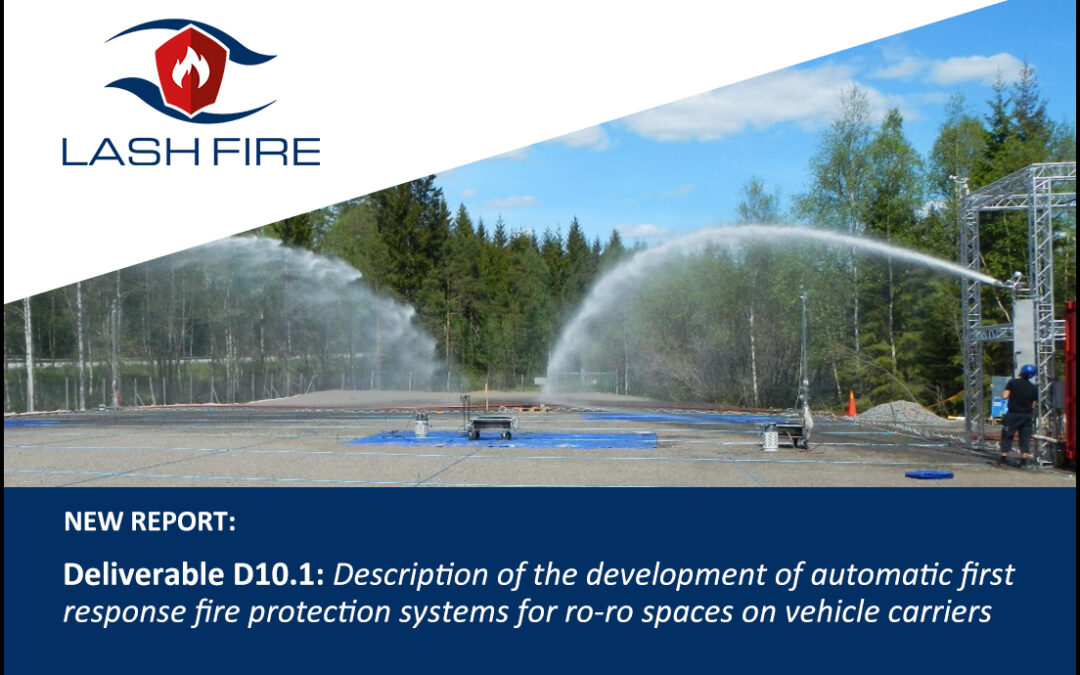 Ro-ro spaces on vehicle carriers are typically protected by a total-flooding Carbon Dioxide system. Due to its toxicity, there could be a considerable time delay from the start of a fire until the Carbon Dioxide system is discharged, which can cause fire damage and jeopardize the performance of the system. This report summarises the development, theoretical evaluation, and preliminary assessment of supplementary water-based Automatic first response fire protection systems.

The system should automatically activate at an early stage of the fire and limit the size of a vehicle fire to allow more time to fight the fire safely manually or to safely evacuate the space prior to discharging the Carbon Dioxide system.The starting point for the work was a comprehensive literature review, identifying relevant standards and information in those standards that are applicable to the design of an automatic fire sprinkler and Compressed Air Foam System (CAFS). The literature review did also summarize fire tests and field experience with automatic sprinkler and water spray systems.

Three primary systems were studied in detail, a dry-pipe sprinkler system utilizing automatic sprinklers, an automatic deluge water spray system and a deluge CAFS using rotating nozzles. For the first system, individual sprinklers are activated by the heat from the fire, the latter systems require a fire detection system for activation. The system development work included small– and intermediate–scale tests. Small-scale CAFS tests were conducted to establish the most efficient foam agent, the admixture concentration, and foam expansion ratio. Intermediate-scale fire tests were conducted with a water spray system and a prototype CAFS to determine the fire suppression performance. Large-scale system validation fire tests were conducted. The results proved that suggested system solutions provided the intended fire control of vehicles in a simulated ro-ro vehicle space.

The work has resulted in detailed design and installation guidelines (as given in the Annex of the report), where additional systems are recognized. These guidelines may be part of regulatory requirements or be adopted on a voluntary basis.