Imagine the scenario that a fire ignites in a narrow ro-ro space packed with valuable goods and vehicles. The attempts to detect in time and extinguish failed and now we are facing a full-scale fire. To prevent this fire from spreading to the entire ship, leading to devastating damage as a result, we must stop it. Contain it and perhaps supress it. This containment is the assignment of Work Package number 11.

The WP11 team have the following objectives on the agenda:
Eliminate significant containment weaknesses, considering smoke, fire and heat integrity.

2: Develop solutions and recommendations to ensure safe evacuation (in line with purpose of SRtP) and when evacuating at foreign port.

4: Determine the effects of natural and mechanical ventilation on fire development and evaluate current possibilities and new measures for smoke containment.

The LASH FIRE project examines fire safety from several perspectives. The various RD&D work packages focus on different research topics on how to prevent a fire to ignite, how to early detect and effectively extinguish a fire in order to avoid a scenario with devastating consequences. But if this work has failed and the fire still becomes a fact, or simply in order to help the firefigting step, we need solutions to contain flames, heat and smoke in smart and effective way and, very important, preventing it from spreading to other areas.

The problem today is that when a significant fire is confirmed it might be too late. 15 minutes seams to be the golden limit people in the business is referring to. If it takes more than 15 minutes from observation to extinguishment, the outcome often is severe. But if we now face such a scenario, how can we handle it making consequences are as small as possible?

Fire resistant walls
One way is to improve the walls in the ship, between ro-ro spaces for example, making them more resistant to heat. If they can contain fire (for at least 60 minutes for example) the propagation of fire and smoke would be reduced. This can be obtained by improving the ability for the wall to contain heat in a three-steps study : defining the true heat load to the wall for a realistic fire, improving our understanding of the heat transfer through a multi-component wall, and optimising the right wall design that warrant this 60 minutes protection. This is done through numerical simulations completed by lab tests.

Shielding curtains
In many other applications (tunnels, buildings,…), sort of curtains are effectively used to contain fire and stop the spreading of fire, smoke, and radiation. This method is now investigated and tested for ro-ro spaces by the WP11 team. Two different kinds of curtains are being tested: water curtains and solid curtains, both with their pros and cons.

A reduced scale mock-up has been constructed in one of the labs, simulating a ro-ro space. The team is now in the process of evaluating the solutions and the effects of both curtains. A pool fire is used to generate smoke and fire, checking whether or not curtains can stop their spread. The main objective is to make sure that the fire does not spread to the whole ro-ro space. The second objective is to take care of the smoke that takes new routes due to the curtains.

Simultaneous strategy for escape and evacuation
These technical solutions aimed at protecting the ship and prevent from fire spread should have positive effect on people escape, which must be ensured for a Safe Return to Port (SRtP) even if the fire becomes dramatic. In addition, in case of a return to a foreign port, solutions have to be found for the desembarkment. Egress simulations are conducted to investigate this topic.

Role of the openings and ventilation
This study on possible containment methods has to be connected to the role of openings that are present along the ro-ro space sides. This has been considered through numerical simulations taking account of the wind influence on the smoke flow. These openings must be designed to avoid any smoke exhaust near the Life Saving Appliances (LSA) used as safety areas for crew members and passengers. The ventilation, either natural or mechanical, is also accounted for since the strategy to extract the smoke has to be thought bearing in mind combined effects with containment and firefighting.

Mock-up test in reduced scale of a fire in a ro-ro space with blocs featuring the trailers.

Results
The curtains seam to effectively block the fire and prevent spreading to other areas. Water curtains tends to push the smoke down to the ground. This so-called de-stratification may penalize visibility for firefighters and cause damage on goods or vehicles. Air drag by the spray application may also have unexpected effects on the fire growth by feeding it with oxygen. Solid curtains seem to be able to contain the fire without such negative counterpart, provided they can resist to the fire load. One key point is that the smoke which is blocked within the ro-ro space finds a way out through the openings. This means that a second look needs to be paid to the location of these openings, ensuring that LSA are not impacted by the smoke. Another angle that is now investigated is the ability to close these openings to avoid the smoke exhaust and suffocate the fire by cutting off the oxygen supply to the flames. This is also a recommendation deduced from simulations of fire spread conducted on the whole ship.

Finally, the team must consider the end user, in this case the ship operators that needs to implement the solution. Curtains need a dedicated free space in the ro-ro space. WP11 has to work closely to WP05 who represent the operators, whose first interest is to fill the space with as much cargo as possible. Therefore, new ideas of curtain implementation must be investigated further. A technical solution has also to be found for the closure of the openings if this strategy is retained. Finally second walk-off abandonment solutions are currently investigated for an evacuation after return to port.

Effects of the work in WP11
The most important outcome from WP11 is that they will help people saving their ships with this new containment methods. The difference between a well-functioning containment system could change the whole game. Supplementary benefits are expected on a better understanding of fire spread onboard, or people egress in various conditions. The team also hope that their research can bring light to other applications as well. As an example, the ro-ro space have more or less the same characteristics as a tunnel, meaning if it works in a ro-ro space it might also be applicable in those applications.

Action 11-A Division of ro-ro spaces

A series of large-scale tests were conducted to evaluate a fabric fire curtain which divided a confined space (a built-up container) as a vertical sub-division. The impact on temperature and spread of smoke layer were investigated in various combinations of vehicles positioned below the curtain. The results show that the fire curtain successfully decrease the propagation of temperature and smoke layer in the space. The work on vertical sub-divisions with fabric curtain together with previous work with water curtain is part of a public delivery in the project.

Based on numerical simulation, the fire propagation on-board has been simulated, providing inputs to evaluate the safety along the path for evacuation. The first step (joining the assembly stations after fire start) was found to be safe enough with the existing design of the tested ship (Stena Flavia), since the time required to join a safe area was found by far shorter than the fire development. Then, the evacuation step itself was studied to escape from the ship, possibly using a second path for ship abandonment. Various solutions were tested, e.g. use of pilot door or bunker door, or even use of slides (as for planes) or chutes (as for buildings) from the upper deck. All the solutions were evaluated and discussed with the ship operators. The conclusions are gathered in dedicated reports for further use and investigation. The gain of knowledge concerning simulation of fire propagation combined with evacuation will lead to scientific publications.

VTT (Finland) performed several simulations of heat transfer and smoke spread from ro-ro space side and end openings to critical areas, such as locations of life-saving appliances and embarkation stations. The simulations were run for various fire locations and wind conditions. This impressive work led to the prediction of safety distances between openings and critical areas. It was seen, however, that the safety distances are dependent on the assumptions made about the environmental conditions and operational procedures. The simulations also demonstrated that manoeuvring can be used to direct smoke away from critical areas if conditions are favourable, and general recommendations for manoeuvring in case of a fire in an open ro-ro space were defined. In addition to the fire simulations, VTT has studied and developed analytical calculation methods for estimating the incident heat flux emerging from side and end openings in case of a ro-ro space fire. By defining critical heat fluxes, safety distances can be determined.

To validate simulation results, large-scale testing at RISE (Sweden) was undertaken to provide comparative temperature and radiation measurements for a fire plume from an opening. The general trends in the experiments and simulations were similar, despite some differences in the fire source and the geometry. Also a test series assessing the critical heat flux for ignition for a selection of materials used in life-saving appliances was performed. The critical heat fluxes measured were of the same order of magnitude as the limiting value assumed in the simulations.

RISE have conducted a series of fire tests in model scale to investigate and evaluate different measures for smoke/fire containment. Model-scale tests were performed to investigate the influence of openings on side plating of a ro-ro space, in case of fire, and to evaluate mechanical ventilation system to be used as fire safety measure. The result will be presented in a guideline for the crew onboard to increase knowledge about mechanical ventilation in case of fire. The guideline has been selected as one of the risk control measures to be further assessed in the project with regards to cost and risk reduction. 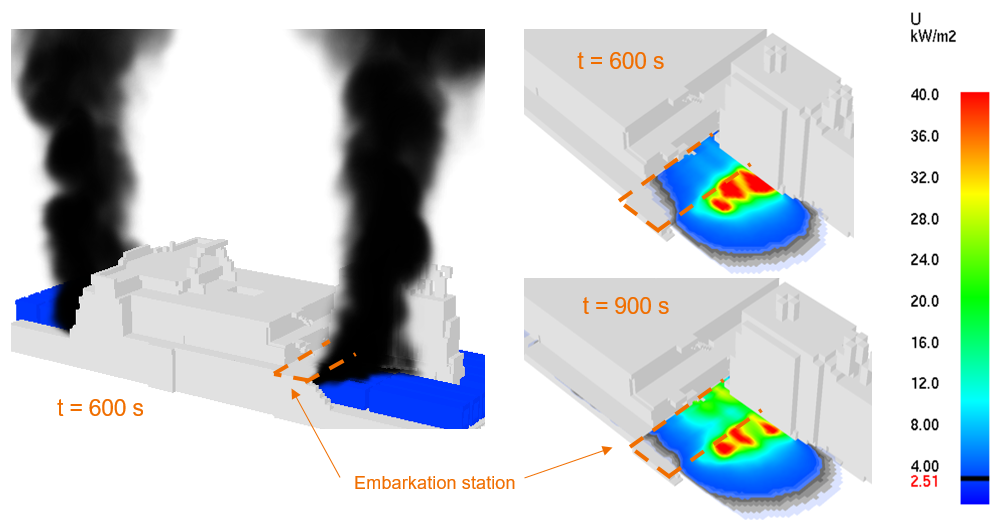 Numerical simulation of smoke propagation from ro-ro space to LSA.

Smoke propagation within a ro-ro space with spray activation sequences to study the containment ability of a water curtain.