WP10 provide more efficient, effective and safe fire extinguishment in ro-ro spaces, regardless of the type or size space and with less crew dependence.

Ro-ro spaces on vehicle carriers are typically protected by a total-flooding Carbon Dioxide system. Such systems have many benefits. If properly designed, it acts as an effective fire suppressant, it is also colourless, odourless, electrically non-conductive, and leaves no residue. But there is one important drawback. In order for Carbon Dioxide to suppress a fire, it must displace oxygen. When doing this, oxygen levels inside the space are lowered to a point that is lethal to humans.

Due to toxicity of Carbon Dioxide, systems are best suited for spaces that are unoccupied most of the time and any crew member need to evacuate the space prior a discharge. Therefore, there could be a considerable time delay from the start of a fire until the Carbon Dioxide system is discharged.

A supplementary water-based fire protection system, that is automatically activated at an early stage of the fire could limit the size of a vehicle fire and prevent or delay it from spreading. This would allow more time to safely manually fight or to discharge the Carbon Dioxide system.

The supplementary water-based fire protection systems that are studied in WP10 include traditional fire sprinkler systems and Compressed Air Foam Systems (CAFS). The systems exist on the market, but WP10 will investigate how they can be adapted for this particular application. Fire testing have already been conducted. These tests have resulted in input on how to design and install the systems to provide fire suppression performance.

A series of photos shows the fire test with the freight truck. A dry‑pipe system utilizing upright high‑temperature, standard-response K115 sprinklers were installed at the ceiling, having a clear height of 4,6 m. The fire was started by the ignition of two heptane pool fire trays (Figure 1) under the engine compartment of the truck. Steel sheet screens with spot‑welded thermocouples were positioned 300 mm to the sides, to mimic adjacent vehicles and to measure the degree of fire control. Figure 2 shows the fire size at the discharge of water from the sprinklers that had activated once water was allowed to fill the system piping. A total of seven sprinklers activated. Figure 3 shows the fire damage after the test. 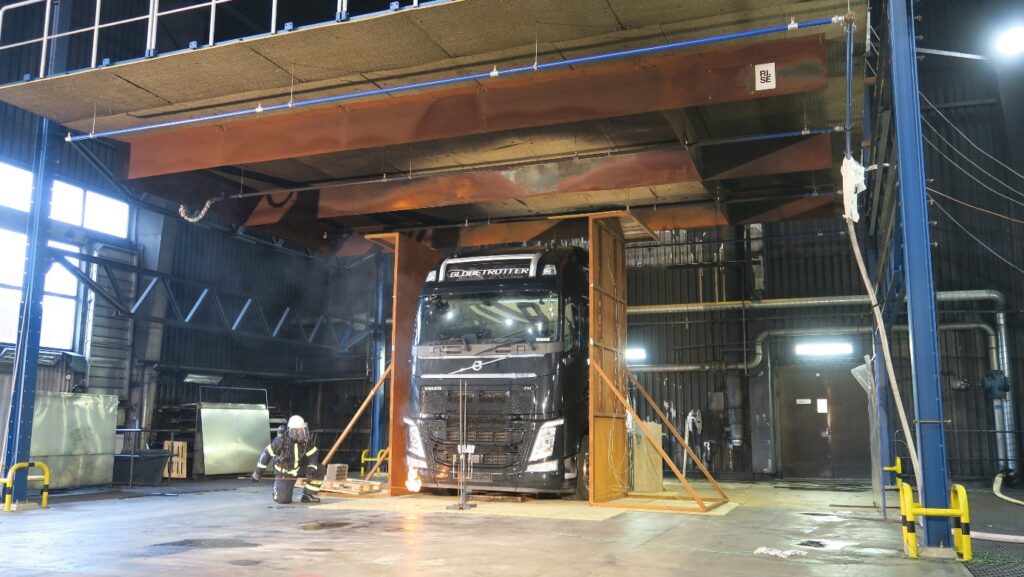 Figure 1 One of the scenarios used in the large‑scale fire tests included a freight truck. The fire was started by the ignition of two heptane pool fire trays under its engine compartment. 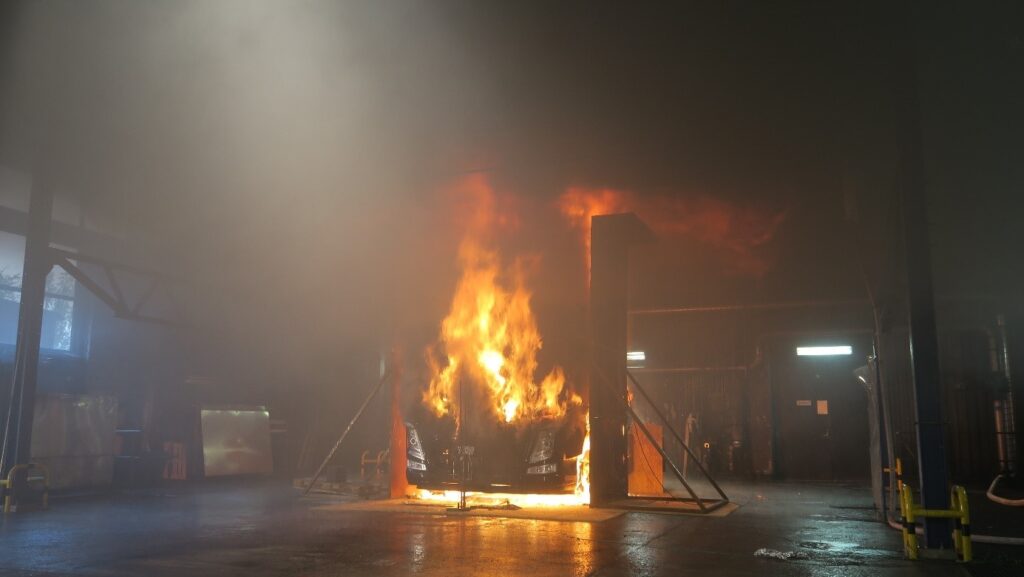 Figure 2 The fire size moments after the activation of the first automatic sprinklers at the ceiling. 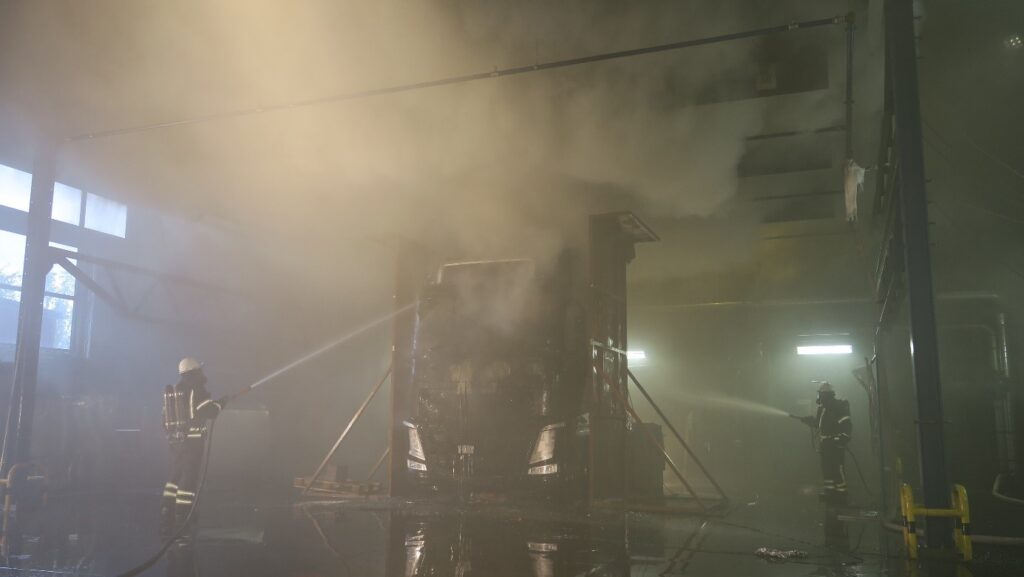 Figure 3 The fire damage after the test.

The tests verified that the suggested system designs were able to provide fire control, by preventing or limiting fire spread to adjacent vehicles and by reducing ceiling gas temperatures. The tests are described in D10.1, “Description of the development of automatic first response fire protection systems for ro-ro spaces on vehicle carriers”, that can be downloaded at www.lashfire.eu. A short vide is also available that shows the tests (see the link at the bottom of the page).

Fire protection systems for weather decks
The second area of focus of WP10 is to research, analyse and test innovative fire protection solutions for open weather decks on ro-ro ships. Weather decks present unique fire detection and suppression challenges, which may benefit greatly from new technological fire detection and suppression solutions. In this context, initial tests of a fully autonomous fire monitor system have conducted. The primary goal of these initial tests was to determine the general viability of such a system for the protection of weather decks on ro-ro ships. The tests were successful in showing that an autonomous fire monitor system is indeed able to rapidly detect fires, accurately locate them, and successfully target them in a matter of seconds, and without any human involvement, refer to Figure 4. 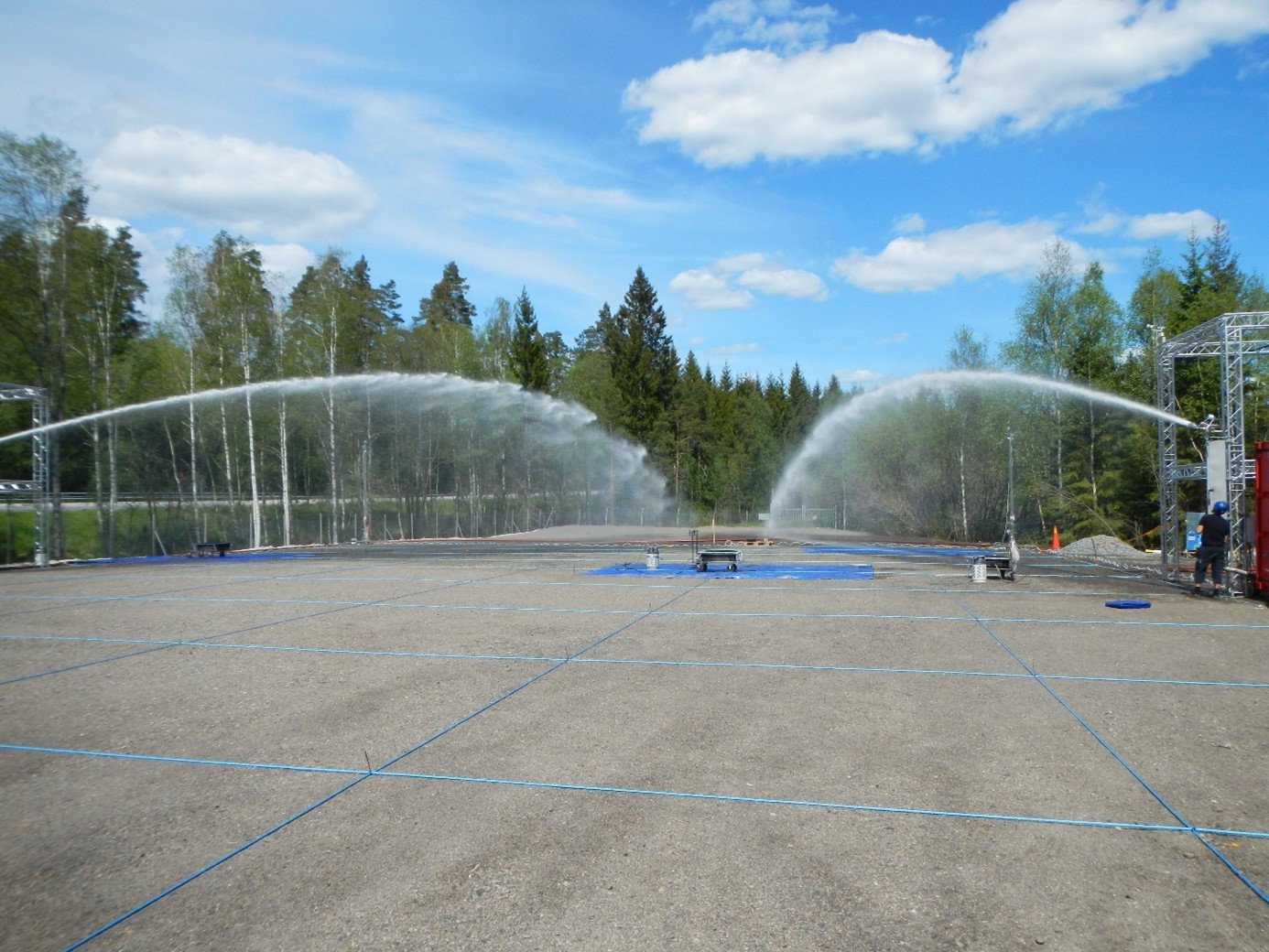 Actual large-scale fire suppression tests have also been conducted using a fire monitor system. The tests were conducted on a rectangular outdoor area measuring 40 m (L) by 30 m (W), which well reflects part of a weather deck. The fire test scenario simulated a fire in a freight truck trailer and consisted of a main array of stacked idle wood and plastic pallets, which was partly covered by a roof. Parallel with and 0,5 m to the sides of the main array, 20 ft. cargo containers were positioned to mimic the compactness of vehicles, trailers, and other cargo on a weather deck, refer to Figure 5. 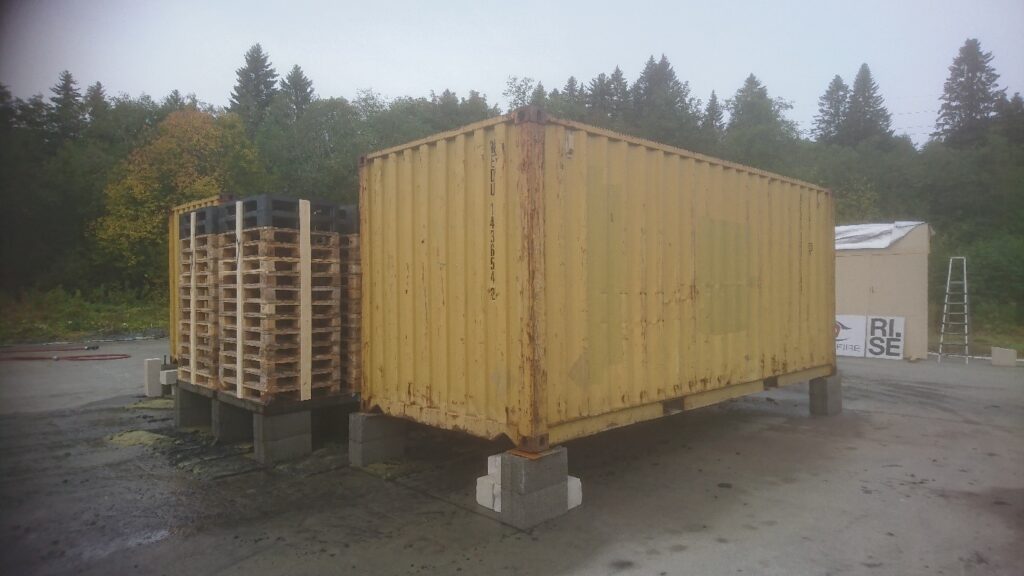 Figure 5 The main array of stacked idle wood and plastic pallets, which was partly covered by a roof, with 20 ft. cargo containers positioned parallel with and 0,5 m to the sides. 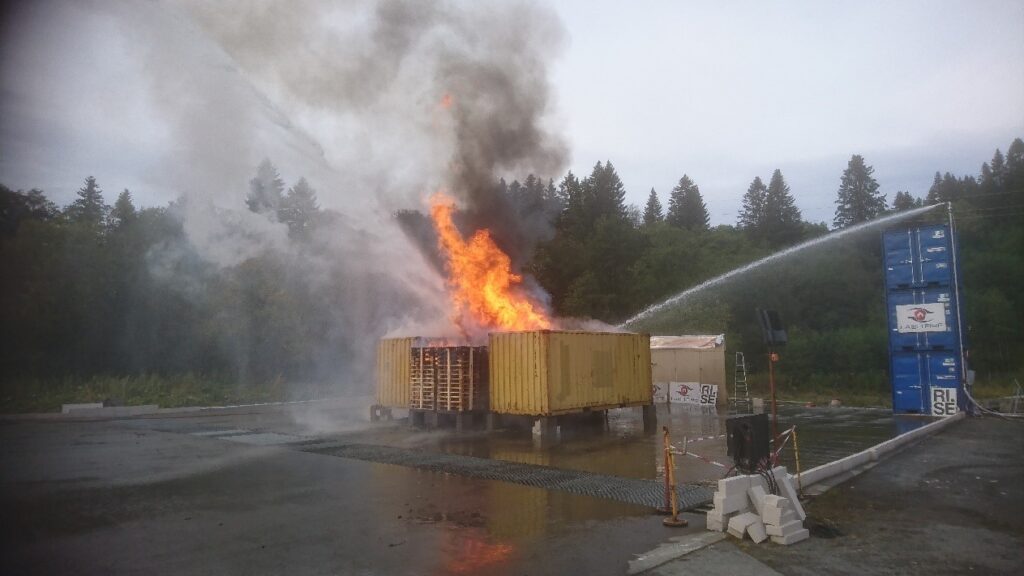 These validation tests proved fire suppression performance with the fire monitor system concept described in the draft design and installation guidelines. The system concepts in these guidelines are built on a philosophy with strategically positioned smaller sized fire monitors with moderate water flow rates, 1 250 l/min per fire monitor. Under normal weather conditions, the objective is that a fire starting at any point on a weather deck should be reached by two streams of water to provide prompt fire suppression. This fire protection objective was illustrated in the test, refer to Figure 6.

Abnormal weather conditions, such as heavy wind may influence the possibilities to reach a fire from two application angles. This scenario was simulated by using a single fire monitor in the tests. It was demonstrated that even a single fire monitor can provide fire suppression given that the water reaches the fire.

The time from the start of a fire to the application of water is a critical factor as fires on a weather deck grow in size and intensity extremely quickly, and ro-ro ships typically must be self-reliant on their own fire safety systems. The time to application was chosen to reflect an autonomous system (30 s delay time) as well as remotely-controlled system operated by the crew members (300 s delay time). It was demonstrated that early application of water will prevent a fire from growing large and provide efficient cooling of surrounding trailers. The fire size when the application of water was delayed was significantly larger in size but was still suppressed.

Improved fire test procedures for alternative fire protection systems
The background of this task involves a concern that current fire test procedures for alternative fixed-installed water-based fire protection systems for ro-ro spaces and special category spaces are not appropriate. Concerns have been raised that the fire test scenarios do not reflect the severity of a fire that may occur in such spaces and the performance acceptance criteria is not sufficient.

A review of actual fires on roro ships was made. For several of the fires, the shielding effect by the body of the vehicle or trailer on water distribution by overhead sprinkler or nozzles is observed. Most of the fires documented in the fire investigation reports started inside the actual vehicle, a couple of fires in the review started on top of a lorry. Another observation is that used vehicles may be filled with combustibles (furniture, electrical appliances, clothing, etc.) that increase the fire load and the severity of a fire. It is apparent that the cause of fire due to failure in the electrical system on older vehicles is not uncommon. None of the fire investigation reports documented fuel spill fires from the vehicles. Based on the learnings, new fire test scenarios representing fires in a passenger car as well as a freight truck trailer were developed. The design of the mock-ups resembled those used in the fire test procedures in the Appendix of MSC.1/Circ.1430, but the aim was to generate more intense fires.

Thereafter, benchmark tests were conducted with an automatic sprinkler system and a deluge water spray system designed per the prescriptive-based requirements in MSC.1/Circ.1430. It is concluded that the fire growth rate seems very repeatable. But for some of the tests, the fire was too severe for a meaningful fire test, which calls for a reduction of the fire load. It was also observed that the performance of the tested systems was to a large degree influenced by the position of the point of fire ignition relative to the nozzles/sprinklers at the ceiling. The experience and outcome documented will serve as the baseline for a revision of the fire test procedures in the Appendix of MSC.1/Circ.1430 in the upcoming work.