Lash Fire mentioned in Forbes magazine: Could These Firefighting Robots Have Saved The Bonhomme Richard? 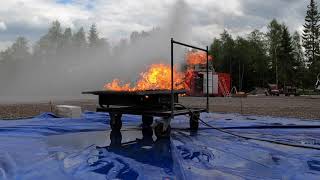 The fire that broke out on the USS Bonhomme Richard on Sunday was still burning at the time of writing. The blaze has caused at least 20 casualties, and the fate of the ship is unclear, with Navy officials stating it was too soon to say if the vessel will be salvageable. But new firefighting technology might have stopped the fire before it ran out of control.

Fire is the biggest hazard for warships. Compartmentalized bulkheads make modern vessels unlikely to sink even if holed below the waterline. During WWII, only one U.S. carrier was sunk, but four were lost to fire. As with Bonhomme Richard, the ammunition and aviation fuel on board made them especially vulnerable to catastrophe.

Swedish company Unifire say their FlameRanger could make a difference. Claimed to be the most sophisticated robotic firefighting system in the world, FlameRanger comprises sensors linked to nozzles on robotic arms. The sensors, which may include thermal imaging, video analytics and flame detectors, localize a fire in three dimensions and estimate its dimensions. The system then directs a spray at the optimal point to extinguish the fire, shutting it off once the fire has been suppressed. The system can cover large spaces where sprinklers might not be effective, with several of the static nozzle mounts positioned so they can cover the whole area . Other shipboard firefighting approaches are less targeted, involving filling hangar spaces with foam or inert gas which take precious time.

“The technology is now well-proven, extremely cost-effective, and could possibly prevent catastrophic events like the USS Bonhomme Richard fire,” according to Unifire spokesman Roger Barrett James.

FlameRanger can be loaded with water or foam. A human operator can take over the system at any time, remotely controlling the jet with a joystick, tablet, or phone via a WiFi or other internet connection. It is ideally suited to fires like that on Bonhomme Richard that require rapid response.

This text was published in Forbes Magazine. Read more