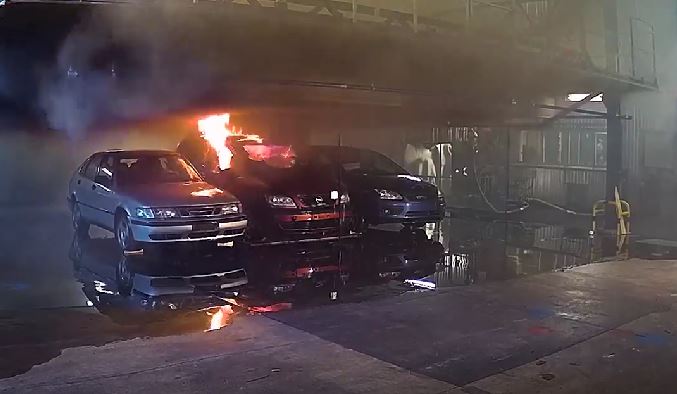 Large-scale fire sprinklers tests were conducted, simulating fires in vehicles when transported on board vehicle carriers. The tests included passenger cars (four tests), a van (one test) and a freight truck (one test). The ceiling heights were chosen to represent the variation in ceilings heights found in ro-ro spaces on vehicle carriers and ranged from 2,0 m to 4,6 m.

The main goal of the tests was to validate that an automatic water-based fire protection system could control a vehicle fire. The tests proved that fire spread from one vehicle to adjacent vehicles was prevented or delayed and that ceiling gas temperatures were reduced.

Based on an extensive literature review and the outcome of the tests, design and installation guidelines for supplementary automatic water-based fire protection system have been developed. If a fire is controlled by an automatic water-based fire protection system, time is allowed to discharge the fixed-installed Carbon Dioxide system in the space. Thereby, fire damage can be reduced.